Now is the time

On March 24, 1982, Rev. John Fife and congregants at Tucson’s Southside Presbyterian Church held a press conference announcing that they would serve as a “sanctuary” for refugees escaping persecution in Central America. The announcement was accompanied by a letter to Attorney General William Smith, explaining that, as part of their becoming a sanctuary for migrants, “Southside United Presbyterian Church will publicly violate the Immigration and Nationality Act”.

What began as an immediate response to an immediate crisis developed into a national movement, capturing headlines and attracting an ever-growing number of churches eager to become sanctuary as well. In the words of one of the founders, Jim Corbett, their efforts became a movement when there was no longer any question that “faith communities will continue to provide sanctuary whenever refugees need protection from government officials [and that] many of these communities consider sanctuary to be an essential part of what it means for the church to be the church.”

Around the same time, urban police departments in the U.S. were embracing the unremarkable notion that, in the words of former L.A. Police Chief Daryl Gates, “effective law enforcement depends on a high degree of cooperation between the Department and the public it serves.” In November 1979 – two years before Tucson introduced the world to the concept of sanctuary – Los Angeles became the first city to systematically limit its cooperation with federal immigration officials. The word sanctuary appears nowhere in the document, but L.A.’s Special Order 40 was significant for limiting what local officers could and could not do in the realm of immigration.

Back in Tucson, the Sanctuary Movement was put on trial – literally. Federal informants had infiltrated the movement, even secretly tape recording church services, and now several of its participants were facing felony charges. But rather than kill sanctuary, the federal prosecutors caused it to flourish and expand, helping thousands of refugees cross the Southern Arizona desert to safety. The Presbyterian Church even sued the federal government for violating its religious freedom by infiltrating its physical sanctuary with informants hellbent on suppressing a social justice movement. The church’s lawyer? None other than future Arizona governor Janet Napolitano.

It’s a story celebrated and retold by many Tucsonans proud of their legacy of social justice, but the term that Tucson lifted into public consciousness in the 1980s is today obscured by the contentious debate around “sanctuary cities”. The Trump Administration claims that sanctuary cities – far from upholding the dignity of all people – are actively thwarting public safety and obstructing the noble efforts of the federal government. Many local leaders are well intentioned yet are easily cowed by Trump’s threats to pull federal funding. The mere label of ‘sanctuary’ by an ill-tempered President is enough to scare many city leaders into submission. Rather than boldly refusing to be complicit in a deportation system that weakens the economic and social fabric of a community, many city leaders offer up milk toast proposals that achieve little in the way of actually protecting their immigrant communities.

In Tucson, we started sanctuary. Let’s give it a re-birth for our times. Let’s boldly say that our local government will not be complicit in a federal effort to destroy our communities. Now is the time for a sensible city ordinance that reflects the current-day needs of our community and embraces the proud legacy of social justice and human rights. 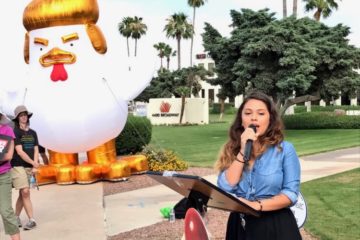 Why I believe in the People’s Defense Initiative

As a struggling woman of color and an immigrant with no clearly defined home, I spent the large majority of […] 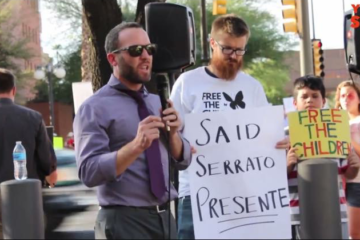 Why I am a part of the People’s Defense Initiative

I am a fighter. I like to fight. I like to stand up for what’s right, and fight alongside the […]